Why My Tweet is Going Viral – Alita: Battle Angel – Sequel? 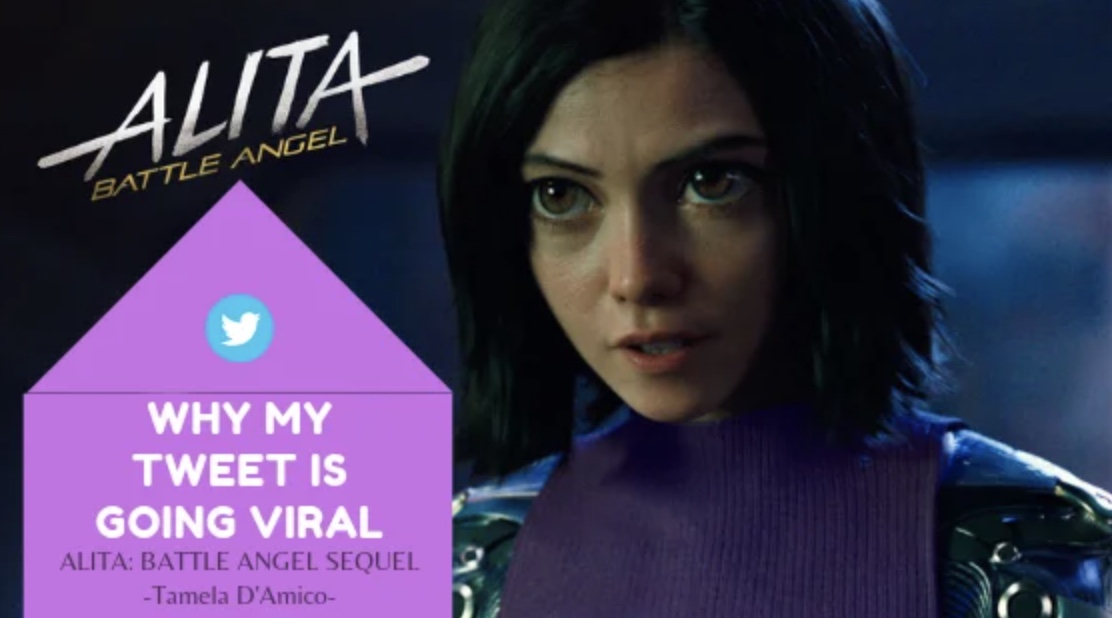 When I tweeted that the other day, I had no idea that I would be entered into a glorious world of passionate fans known as #AlitaArmy. Phew!

Last weekend, my boyfriend recommended that we watch Alita: Battle Angel as one of the movies to screen for our usual weekend watch.  I remembered vaguely seeing a poster for this film earlier in the year, but I had no idea what it was about, so I pushed for another viewing option.  After much chilling out to old and classic movies, he suggested Alita one more time.  This time, he described what the movie was about and I thought it sounded cool and we went ahead for the watch.  From the moment the film started, seeing how seamless the technology was and the beauty of the photo-realism within the dystopian world the filmmakers created, I was hooked. It was unlike anything I have ever seen.

From the website, here is the description of the film:  ‘From visionary filmmakers James Cameron (AVATAR) and Robert Rodriguez (SIN CITY), comes ALITA: BATTLE ANGEL, an epic adventure of hope and empowerment. When Alita (Rosa Salazar) awakens with no memory of who she is in a future world she does not recognize, she is taken in by Ido (Christoph Waltz), a compassionate doctor who realizes that somewhere in this abandoned cyborg shell is the heart and soul of a young woman with an extraordinary past. As Alita learns to navigate her new life and the treacherous streets of Iron City, Ido tries to shield her from her mysterious history while her street-smart new friend Hugo (Keean Johnson) offers instead to help trigger her memories. But it is only when the deadly and corrupt forces that run the city come after Alita that she discovers a clue to her past – she has unique fighting abilities that those in power will stop at nothing to control. If she can stay out of their grasp, she could be the key to saving her friends, her family and the world she’s grown to love.”

THAT description, coupled with the trailer, should have spelled worldwide success, but for some reason this film was not marketed properly. There are rumors surrounding the fact that Captain Marvel had released at the same time and the Disney-Fox merger might have squelched any hope for this film’s celebration.  I don’t know about that and frankly I don’t care.  It’s in the past.  I just heard about the film and have watched it five months after its release and it has inspired and excited me as a filmmaker.  You can now find the film on all digital platforms and it is due out on Blu-Ray, DVD and 4K Ultra HD July 23rd.  When something is great, I have to let everyone know. So, I am doing my part to let you know NOW, when I know! I have no stake in this movie and no paid influencer agreement with them, if anyone is wondering.  I simply believe it is a stellar film with movie making technology that has never been seen and a script that keeps your full attention from the opening credits.  I finished this film, loving and caring for the character Alita, which usually means a desire for a sequel. Desire there is! The #AlitaArmy is calling for one. There is even a petition (posted at the bottom of this blog) for you to sign your name in support of a sequel to this exceptional movie. Supposedly, James Cameron declared that if the worldwide numbers for this film changes to a greater amount after released on home video that it would behoove them to continue with already planned sequels.  But the fans and viewers would have to come through…

Alita: Battle Angel  is the feature film adaptation of Yukito Kishiro’s manga (Japanese comic) series. James Cameron had a vision for this film that pulled out all the bells and whistles you want to see but within the context of real-world technology.  It’s dystopian and yes, Alita is CGI. But she is unlike any CGI you have ever seen. Midway through our viewing of this film, I needed to pause because I just couldn’t believe how fluid her movements were and I was convinced that the real actor had to have done the motion capture.  To my delight, after viewing the film, I researched this and quickly found awesome behind the scenes video of Rosa Salazar who plays Alita, on set, acting in very expensive gear.

If you don’t want to spoil any first impressions of this movie, do not watch the below YouTube video.

I am not going to go into the nitty gritty of the plot and cool details of technological toys that are in this film, nor will I describe my favorite scenes.  You need to experience this yourself.  I want you to watch it and conclude your own opinion and if you agree with me, share this link, post some comments below or simply share the info about the film and click the below petition to help make this sequel happen.

Sign the petition for an Alita: Battle Angel sequel!